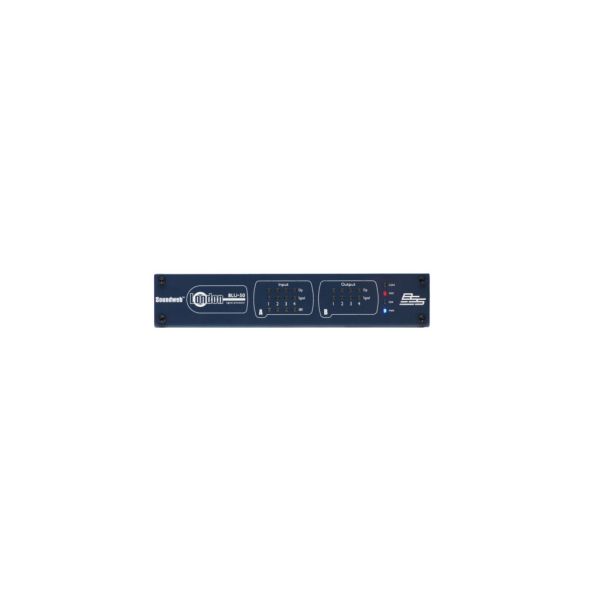 The BLU-50 is a half-rack width processor that offers a fixed configuration of four inputs and four outputs, configurable signal processing, logic processing and BLU link.

The BLU-50 is a half-rack width processor that offers a fixed configuration of four inputs and four outputs, configurable signal processing, logic processing and BLU link. The device can be powered with the included 12VDC power supply but can accept 12-48VDC via a terminal block connector. The BLU-50 can also be powered with PoE+ via the Ethernet port, allowing the device to be powered, configured, controlled and monitored using a single Cat 5e cable.

The analog inputs of the BLU-50 provide software configurable gain in 6dB steps up to +48dB per channel and software selectable Phantom Power per channel. Phantom Power, Signal Present and Clip information per channel is easily accessible, without the requirement for a PC, from clear front panel LED indication.

The BLU-50 is configured, controlled and monitored from HiQnet Audio Architects or HiQnet London Architectâ„¢ and is compatible with other members of the Soundweb London family. Its 48 channel BLU link bus represents channels 1-48 of the larger 256 channel BLU link bus when integrated with the BLU-800, BLU-320, BLU-160, BLU-120, BLU-BIB and BLU-BOB devices. Up to 60 BLU link compatible devices can share channels on a single bus.

As with other Soundweb London devices, 12 Control Inputs, six Logic Outputs and an RS-232 port allow the BLU-50 to be integrated with other compatible devices.

4 other products in the same category: