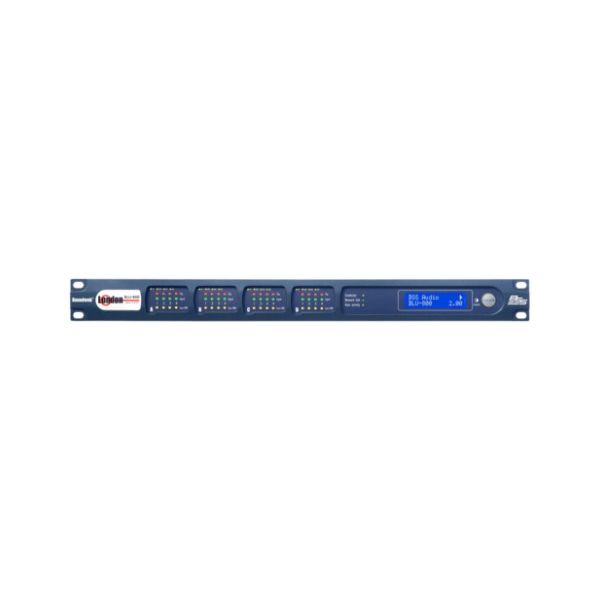 The BLU-800 has open architecture which is fully configurable through HiQnet London Architect. A rich palette of processing and logic objects and a “drag and drop” method of configuration provide a simple and familiar design environment.

This processor features CobraNet audio with primary and secondary ports for fault tolerance. Control is through a separate Ethernet port which allows CobraNet and control networks to be easily separated or mixed depending upon requirements.

The BLU-800 also features a low latency, fault tolerant digital audio bus of 256 channels which uses standard Category 5e cabling giving a distance of 100m between compatible devices. Fiber optic media converters can be used to increase the distance between devices to over 40km.

Analog Input Cards provide software configurable gain in 6dB steps up to +48dB per channel and software selectable Phantom Power per channel. Digital Input Cards and Digital Output Cards process AES/EBU and/or S/PDIF audio and offer a variety of clocking and syncing options. (Further information about the I/O cards can be found on dedicated datasheets)

Phantom Power, Sync, Signal Present and Clip information per channel is easily accessible, without the requirement for a PC, from clear front panel LED indication. Device-specific information such as Device Name, Device Type, Firmware Version Number, Time, IP Address and Subnet Mask is available from the front panel display. A bi-directional locate function allows devices to be identified both from and within HiQnet London Architect.

The BLU-800 and the other members of the Soundweb London family provide the building blocks of the perfectly tailored system solution.

7 other products in the same category: