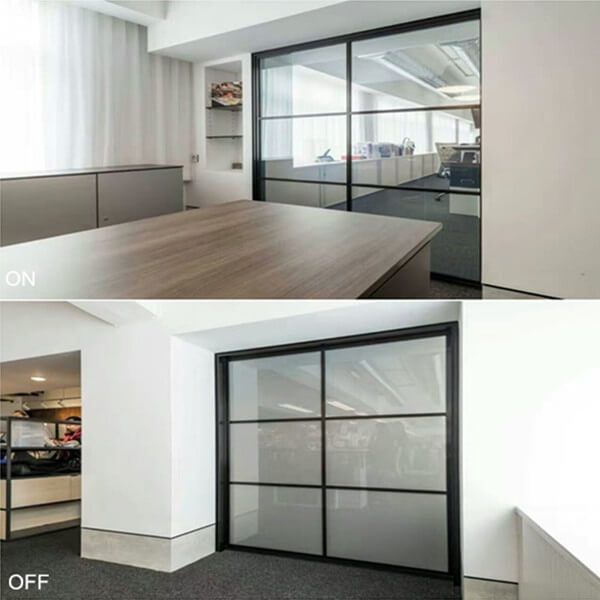 2 Installation types with Smart Film: Self Adhesive and Non Adhesive.


TO CALCULATE COSTS PLEASE CLICK ON THIS PRODUCT, THEN CLICK ON THE GREEN BUTTON ON THE RIGHT OF THIS TO CONFIGURE OPTIONS >>>>>>>>


2 Installation types with Smart Film: Self Adhesive and Non Adhesive.

Sheets are factory custom cut to suit your requirements based on specifications submitted.

Items take 3 weeks to maufacture and 1 week to check test and deliver.

Although PDLC Film can be cut with specialist tailor scissors, we recommend having sheets cut to order by factory.

A buss bar 8mm deep will be fitted along the longest length, or 2 shorter buss bars can be fit at either end of the shorter lengths.

A 2 Core Cable will be supplied attached to the PDLC Sheet to connect to the Power Supply which can be switched on and off to control its use.

The Power Supply is usually rated between 36V AC and 48V AC depending on the size of sheets and how they are to be connected.

Above Calculated Costs Include for PSU's also in the prices.

We also have a huge range of wireless controls you can utilise to integrate you lighting, bilnds and PDLC to be simply controlled by wireless wall plates you can stick on anywhere and control via your phone too. Please see our Rako Selection of Wall Plates, Lighting and curtain Controls here  https://www.akwil.com/242-rako-wireless-and-wired-smart-controls

Any questions feel free to contact us, we are here to help :)

It is capable of adjusting light transmission between transparent and opaque using AC power. Applied for making smart glass by lamination on glass, or Stick on any existing glass surface, to get a instant privacy on demand. It gets many functions, such as light adjustment, UV and infrared blocking, advertising and secutiry.

LC particles, by electrical connections, stand in one direction to let the light pass through and create transparency. As the current is off the particles are scattered in various directions; consequently they partially impede the pass of the light and cause the opacity.

Electric tint for cars, It can be applied on car side window, rear widnow and also the sunroof.

Smart tint windows, It can be applied for windows & doors for any existing glass. Just stick the film and turn on it.

Easy installation. Put film on the glass surface, it can be SELF ADHESIVE like mobile screen film, very simple operation.